We have 688 guests and 2 members online

Snatching Defeat from the Jaws of Victory

Less More
2 months 3 weeks ago #16890 by Westcoast
Snatching Defeat from the Jaws of Victory was created by Westcoast
I've been posting thses flight accounts under the "Official Flight Reports" section of the 387th Bomb Group section of the forum.  Techinically, this is not really correct.  Our intention for this section was to allow pilots to report their results - in some, yet to be determined, format - the results of their assigned missions:  targets identified, bombs dropped, bomb miss distances, etc.  So,I am misusing this "sub-forum" to report my results on preliminary, "pathfinder missions", which I have been flying to form the basis of your mission assignments and briefing for Phase 4 and beyond.  So, I am experimenting with flight plans and altitudes, target identification, bomb ballistics, etc.  I'm learning a lot in the progress.  Hopefully, this will make it easier for you, if you ever get to this point , to succeed on these missions.  At the same time, i am avidly reading the history of the air war in the European Theater of Operation (ETO).  It never ceases to amaze me how my flight simulator experiences anticipate/replicate what I learn about flying in other (RW) accounts.  So it is with the 387th BG project.

Although my flights don't need to deal with antiaircraft fire ("Flak"), or German ME-109 or FW-190 interceptors, I am finding it very difficult to successfully complete a  mission.  The difficulties center on navigation in poor weather, identification of the target, successful execution of the bomb run - that part of the mission in which the bombardier lines the aircraft's flight path up on the target bearing and computes the proper release point for the bombs, and successful return to and landing at the home  base airfield.

Given that I am addressing a mere part of the problem, I am not at all surpried that the heavies (B-17s and B-24s) wre sustaining mission losses in the range of 20% to 30 % over Germany during 1943 and early 1944.  A B-17 pilot or crew member was initially required to complete 25 (later 30) missions over enemy territory before being rotated to the states as a flight instructor.  If your unit sustained 20% losses per mission, your probability of completing 25 (30) missions was 0.3% (0.1%), in other words, nil.

As of a couple of days ago, I had yet to comolete a successful mission of those flown by the 387th in the summer of 1943.  That all appeared to change with Mission 9 on Aug. 31, 1943.  This was an attack against the Lille-Vendeville airbase in northern France.  Prior to that I had flown M3 (twice) against the Luftwaffe fighter base at St. Omer and once, M8, against the coal fired power plant at Rouen - displaced to Le Havre.  In all three cases, I either failed to find the target due to weather, or executed a poor bomb run and failed to significantly damage the target.

For M9, I devised an attack plan which provided potentially visible waypoints in route and a two minute bomb run on the target.  To make the conditions realistic, I closed Plan G before takeoff, meaning that I would have no moving map indication of my position.  Again, I accepted the historical weather as appropriate to Aug. 31st (2020) and commenced the mission at 0740 Z.  the first leg was to the NF NDB on the English coast, thence at a heading of 155 M to a (hopefully) visible checkpoint south west of Calais on the French coast.  Upon climbing to our cruise altitude of 10,000', we were in solid weather, unable to see the ground. 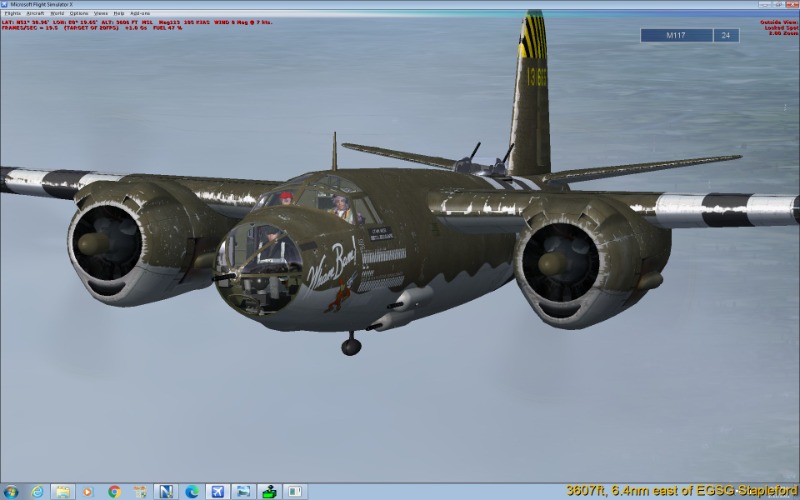 At our predicted waypoint over the French coast, the ground was still obscured, so we made our turn to 124 M based on time alone.  Since the ground was still obscured, we initiated a descent ot 6000' in the hope of being able to locate our next waypoint (LFQT - Calonne).  Miraculously, the "undercast" cleared just enough to allow us to identify LFQT right under the aircraft at the exact time predicted by my dead reckoning navigation.  With this reaasunce in the validity of my navigational skills, we were able to locate our initial point (IP) for the bombrun, again exactly on time.  Then, as we descended to 5000' and began the bomb run, the clouds parted to reveal our target dead ahead and about 5 deg.left of our bomb run heading.  All of this navigation over a distance of 85 nm from the last NDB to the target done solely with wind-corrected dead reckoning. 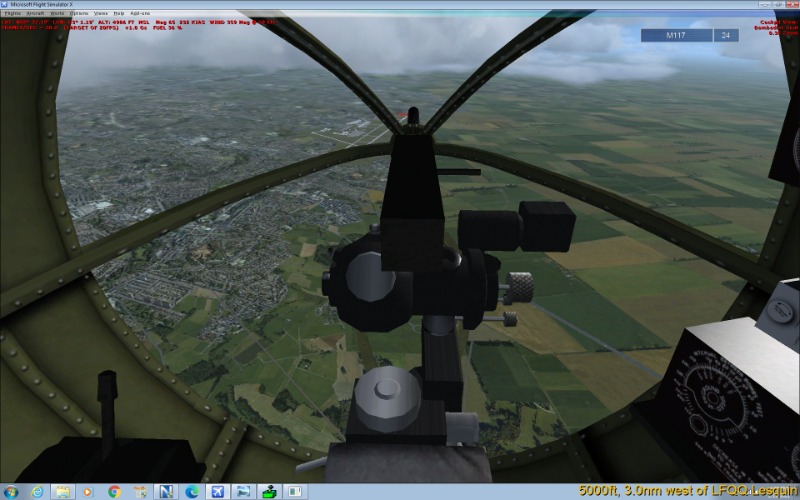 With a minor heading correction, we began releasing our bombs short of the airstrip and laid the 23 bomb stick across the taxiways, the main runway and the eastern pad area..  Had we been leading a 36 aircraft Group strike (two 18 A/C boxes), we would have done extensive damage to the main runway, the taxiways and one of the two principal ramp areas. 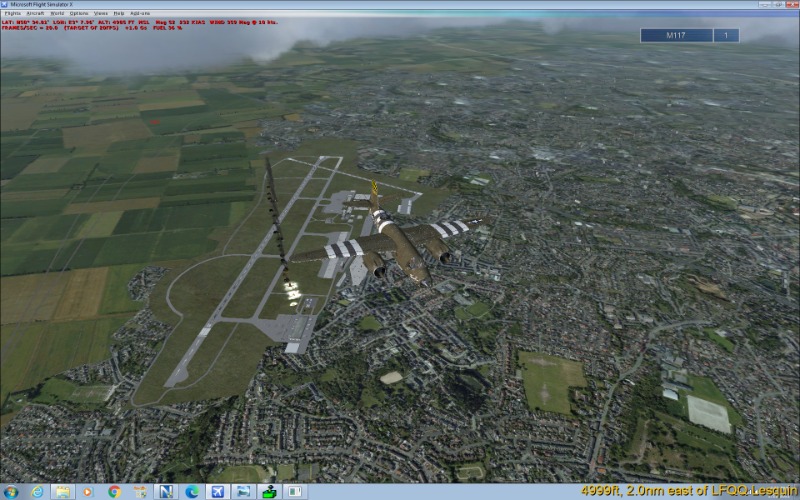 I was ebullient, finally a successful mission, it can be done, with zero cheating.

Apparently too ebullient.  As we excited the target, I made my turn to port to the Rally Point to regroup and then began counting down the time to our arrival back at the French coast.  This should have required 15 minutes.  As the predicted time approached, I scanned the horizon for signs of the coastline.  When it failed to appear, I went back to my flight plan and realized that, in the fever of my self-congratulation,  I had missed a 97 deg. turn to port at the Rally Point.  Accordingly, I had  headed the Group south into France and towards the Med..  Without further navigational analysis, I made an 180 turn to 340 M and headed for the channel - I definitely didn't want to put down in Vichy occupied France or North Africa (the Allies didn't invade North Africa until October 1942 and their progress to the east had not been part of the mission briefing for M9).

Progress to the channel was agonizingly slow, and it was only as we crossed the channel that I realized that fuel was becoming an "issue"..  I flew the biefed plan, heading to the NDB at Stansted, turning-up wind of Rwy 20 at Willingale and then commencing the long downwind.  Althoigh Stansted had an acceptable ceiling and appeared VFR from 1200', the ceiling lowered as I approached to base leg for Willingale.  As I turned base, I saw that my fuel stood at 2%.  Nonetheless, I identified the turn to final (practice helps) and managed to accomplish that.  However, as I approached the threshold of Rwy 20, the ceiling lowered further and I lost sight of the runway.  When I funally resighted the runway I was halfway down it and at about 200' AGL.  I considered a go-around, but then decided I had insufficient fuel.  I tried to get the aircraft down, but touched down on the numbers (wrong set) and went through the grass overrun into the trees.  We had 17 gallons left in the tanks.

So, I am oh for four.  What did I do right and wrong?  I am getting good at dead reckoning.  If the weather gives you half a chance you can get to and find the target.  I loaded 50 % fuel which, even with a full bomb load, still left me well under GVW.  If I had loaded full fuel, this accident would not have occured because, after going missed at Willingale, I could have easily returned to Stansted and landed.

So, older and wiser, we go on.  The next mission on my plan is Mission 50, Dec. 5, 1943, the V-1 site at Ligescourt-Bois de St. Saulve. This site is a concrete launching ramp for the V-1 missile aimed at London.  It's well hidden in a wooded area, but still visible on Google Earth and in the FSX scenery.  I also have a reconnaissance photo of the site following the 387th attack.  So, we know they could do it.  Can we?