We have 607 guests and one member online

Less More
2 weeks 6 days ago - 2 weeks 6 days ago #17206 by Westcoast
387th Bomb Group: Mission 003 was created by Westcoast
To give you a sense of what lies ahead and to get our feet wet in the first "operational" phase of the 387th BG project, I have prepared a "sample" mission.  This mission has not yet been posted to the assigned mission page and the associated scenery files have not yet been packaged for distribution,  but this should give you an idea of what an assigned mission would look like and how it might go.  To do this, I have generated both the pre-mission briefing that pilots would receive early in the morning, and then flown the mission myself and prepared a post mission report, or debriefing.
The subject mission is mission 003 for the 387th BG, and the first mission the Group flew over enemy occupied territory.  It was flown on Aug.15, 1943
MISSION 003
St. Omer Aerodrome
Good morning gentlemen.  Today's target will be St. Omer airfield.  It is a small Luftwaffe fighter base in northwest France which hosts a number of Messerschmidt Bf 109 aircraft which have been intercepting our B-17 aircraft enroute to their targets deeper in occupied France and Germany.  Our objective is to damage or destroy this facility, including its single paved runway, the control tower, aircraft revetments, fueling and maintenance facilities and any aircraft we might be lucky enough to catch on the ground.

This photograph of the field was captured by high altitude photoreconnaissance  a few days ago: 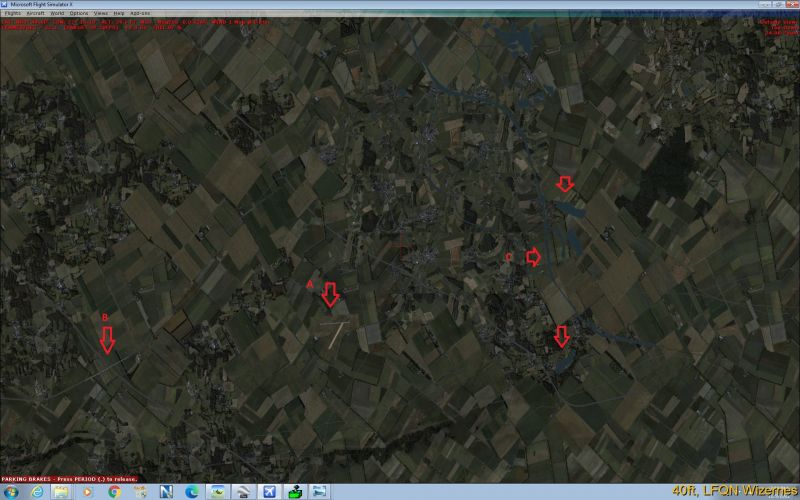 If you expand the picture, you can see that the base (A) is small and has one paved runway and one dirt/grass runway.  But since 109s are capable of using rough grass runways, cratering the paved runway will have minimal lasting impact,  Accordingly, your target should be the aircraft and fixed facilities.
One of our P-47s from the 511th Fighter Squadron made two low passes over the base two days ago. 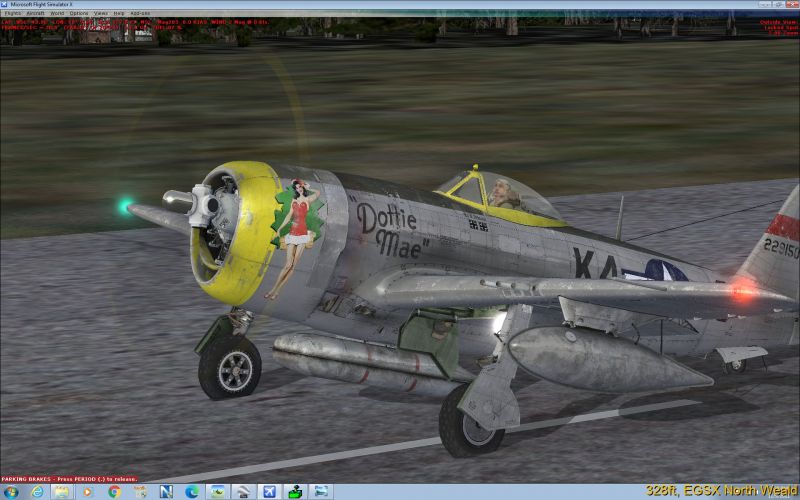 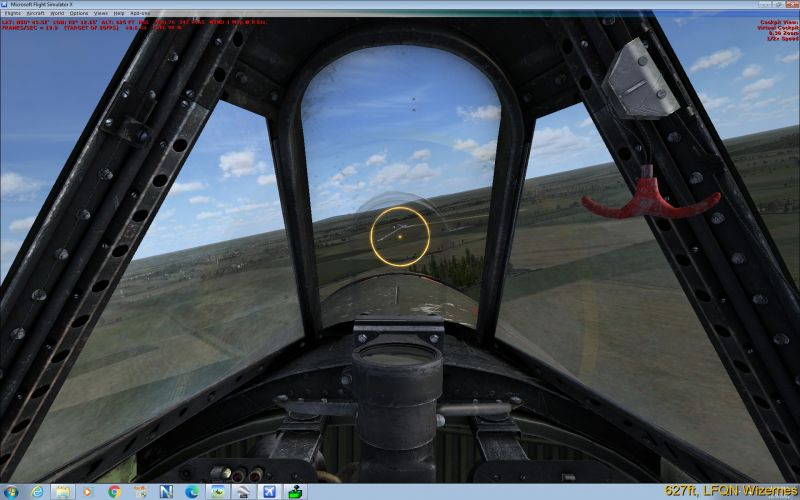 That V shape in the gun sight is the intersection of the two runways.  As you can see (below), there were about eight 109s in residence, five parked on the grass (to the left of the control tower), two in the maintenance hangar, and one preparing for takeoff. 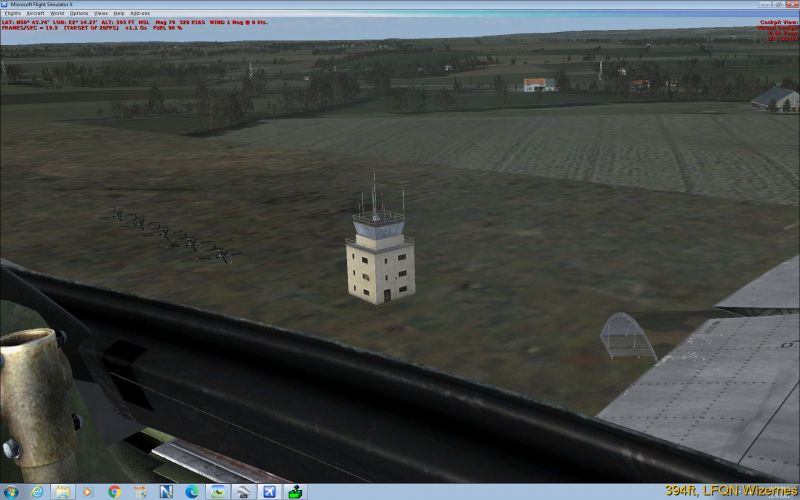 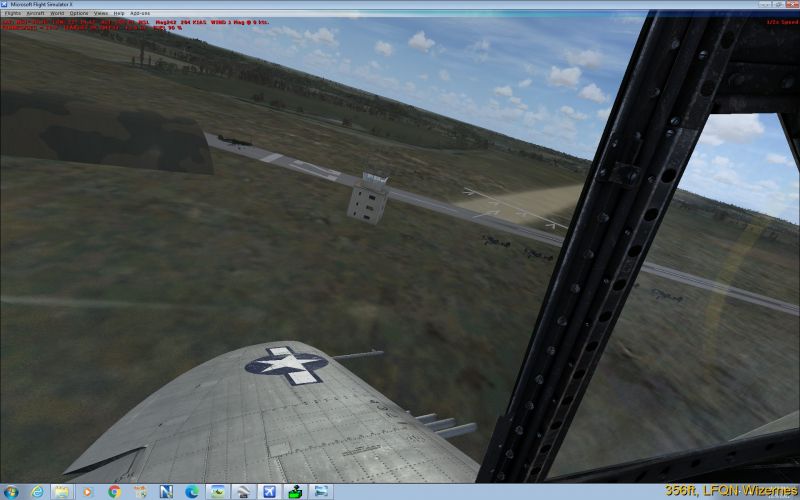 As the crow flies, St. Omer is only 21 NM from the French Coast, so it won't take long to get there.  Here is a flight plan map. 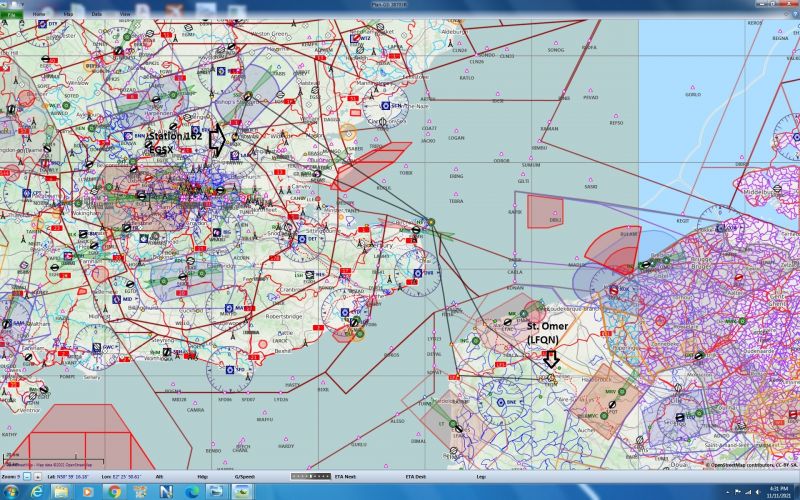 Current intelligence indicates that German Flak emplacements are concentrated mainly near the coast and there don't seem to be AA installations sited with the target.  Accordingly, we will cross the French coastline at 10,500'.  This is a compromise between flying higher to evade flak and flying lower to improve bombing accuracy.  Since St. Omer is close to the coast, we will not have time to change altitude before beginning the bomb run.  So, we will bomb from 10,500' at 200 KIAS (about 245 KTAS).  We expect clear weather , but that is always subject to change, so accurate navigation is a must.

Here is the flight plan: 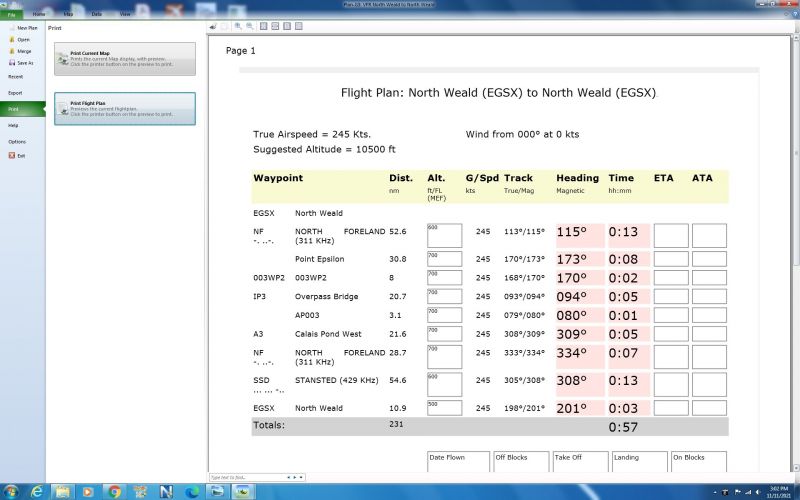 Depart Station 162 and climb to 10,500' and 200 KIAS.  Use coded signal from NF (311 kHz) to fly directly to NF, and then turn right to 173 mag. to intercept point epsilon on the French coast.  Given reasonable weather you should be able to recognize this waypoint as a sharp cape on the coast.  It should only take about eight minutes to cross the channel, so keep your wits about you.  After epsilon expect flak at any time.  At epsilon correct left three degrees to reach WP in two minutes.  Turn left at WP2 to 094 mag. and start looking for a conspicuous overpass bridge where a local road crosses a major highway.  Our P-47 also got a shot of this feature - it's the twin towers left of the right wing. 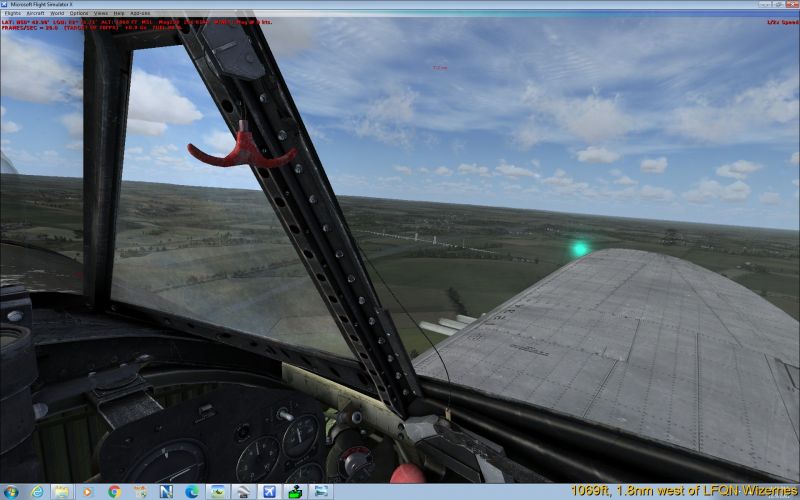 This is your IP for a very short (one minute) bomb run.  Turn right to 080 mag. and track on your target.  It is essential that the bombardier recognize the target well before the IP.  This is difficult, as the aerodrome is nestled in agricultural fields and is hard to recognize from 10,500'.  Look for blue splotches in the distance, these are a canal and several large ponds behind St. Omer, down-range from the target.  Those are the features C in the Recce. Photo.  You will need your bombsight in telescope mode to find the target.  After you locate the target, switch to the 45 deg. offset aiming point mode.  We are still working to get the ballistics of the M117 bomb straight.  Data from your run will help with this, if you record all relevant data and provide good BDA photos.  Here is the offset aim point for this target: 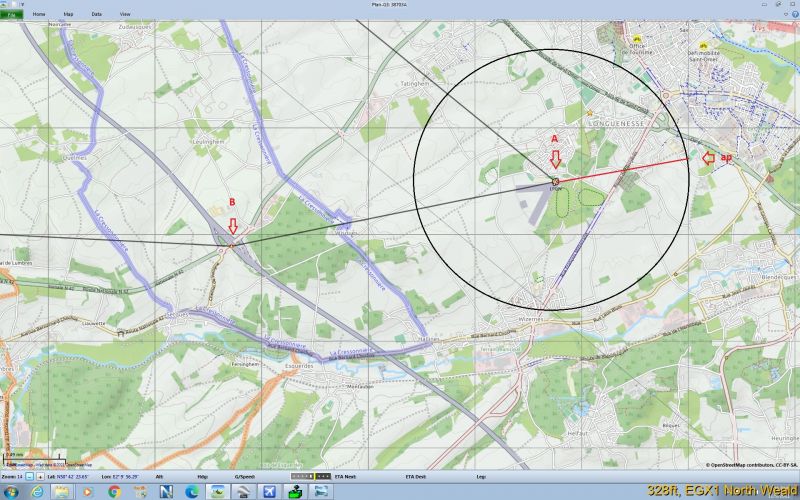 The IP bridge is point B, the target is point A and the estimated aim point is ap.  We expect an offset of at least 8000', which means that the aiming point should appear about 20 seconds after the 45 deg. aiming point passes the target.  Alternatively, you can just wait 20 seconds after the aim point crosses the target before starting you eight bomb stick.  Release individual bombs on 2 second intervals so as to spread your stick over about 6000' in range.  Don't forget to take BDA photos on exiting the target.
On exiting the target turn left to 309 mag. to waypoint A3, Calais Pond West.  This is a conspicuous landmark and should be visible through moderate weather.  At A3, tune your ADF to 311 kHz and home on NF, while descending to 5000'.  At NF, turn from 334 mag. to 308 mag. and tune SSD on 429 kHz. Descend to 2500'.  You won't raise SSD for some time.  Approaching SSD, execute a standard VOR approach to Station 162 (EGSX).  In case of emergency or IMC, land at EGSS and land transfer to Station 162 for debriefing.